The Uncomfortable Truth about Returning to the Office

Elon Musk’s recent rule changes at Twitter have sent ripples throughout the workforce. Or what’s left of it. But has he just done employers across the world a favour?

According to a poll by Advanced Workplace, a meagre 3% of white-collar workers want to return to the office full time.

Unsurprisingly then, many have criticised Musk’s latest insistence that all Twitter employees who can work from the office must do so.

He has been blunt when making his thoughts on WFH known. He’s not a fan. Back in June he tweeted that Tesla workers who refused to come back to the office, “can pretend to work somewhere else” - so he’s not likely to win a popularity contest anytime soon.

Musk is, however, a shrewd and successful leader, so there’s a strong chance his mandate to bring Twitter employees back to their desks has a more practical reason beyond the crazed ego trip many have accused him of.

Like or loathe the guy, when the undisputed richest CEO on the planet tells you what’s good for business, you listen.

While working from home arrangements have proliferated after the pandemic, so has the number of people feeling lonely in their jobs, which is having a bleak effect on their wellbeing.

A recent study from Mental Health UK has revealed that 1 in 5 people feel lonely at work, and nearly half of workers aged 18-34 think that a lack of physical office space to meet colleagues could harm their mental health.

The fact is that playing “sorry, you cut out” tennis on Zoom calls has replaced face-to-face meetings and the end of water cooler chit-chat has made it exponentially harder for people to form meaningful relationships with co-workers.

The study shows the Gen Z age group (18-24) are twice as vulnerable to loneliness at work compared to older employees. By 2025, this cohort will make up over a quarter of the workforce, so there’s good reason to believe the numbers will only worsen with time.

Is Loneliness a Big Deal?

Yes. Aside from the emotional turmoil, loneliness has been proven to weaken the immune system, increase the risk of heart disease and even Alzheimer’s. Research suggests that a strong and sustained feeling of isolation can be as bad for your physical health as smoking 15 cigarettes a day. To say it’s taking its toll on the productivity and engagement rates would be an understatement.

To make matter worse, lonely people don’t tend to signpost their feelings. They often withdraw further because of increasing anxiety. In fact, almost half of workers wouldn’t feel comfortable letting a colleague know if they were feeling isolated at work.

The big dilemma leaders face today is having to balance the loud demands for flexible and remote working situations (and the ever-looming threat of “If I don’t provide it, another company will”,) with their responsibility for the emotional health of their team, to which remote working, however popular, can be a detriment.

While we’re not advocating for Musk’s bullish ‘like it or lump it’ approach, perhaps he’s setting a helpful precedent. Could getting workers back in the office be the tonic to stop the snowballing of a mental health crisis, that threatens to avalanche as Gen Z filter into the workforce?

According to data from Flexa Careers, a reversal in sentiment about home working is already underway. The number of jobs being advertised as “fully remote” dropped by 58% from between August and September.

Aside from 'keeping an eye' on workers like Musk intends, there’s a clear business case for transitioning workers back to in-office arrangements.

A co-working environment allows for:

A stronger sense of purpose, impact and belonging

It’s easier for employees to feel like they’re contributing to something when they’re physically in the thick of it.

Micro interactions throughout the day help to relieve feelings of isolation and anxiety and lunches are a social event, not just a sad solitary sandwich.

For the same psychological reason you exercise harder at the gym than at home, working in close proximity to others has been shown to enhance productivity.

Without the everyday distractions, from pets to the postman.

Email and instant messaging are the enemies of deep focus while in-person conversations can save time and frustrations.

How to encourage people back into the office:

There are two obvious routes: you could try the no-nonsense ‘stick’ method a la Elon Musk at the risk of your reputation and retention rates. Or you get creative with the more amiable ‘carrot’ method, using monetary incentives, or offering free coffee and ice-cream like Goldman Sachs.

There is, however, a third option to consider, that will help you to draw your employees back to the building organically: give them tangible, long-term reasons to want to return.

Jazz up the office

If you had the choice, would you return to a drab office space when you had a better set up at home? If you’ve got a bit of budget, why not revamp the office to make it a vibrant and comfortable space to work. A lick of paint, some indoor shrubs; small changes can make a big difference - though a ping pong table will always earn some cool points.

The power of FOMO

Don’t axe virtual opportunities altogether, but there’s no harm in stirring up a little office envy. Use social media, a shared work platform or internal newsletter to showcase any exciting in-person meetups, from team pub trips to book clubs and quiz nights. Humans are social beings, and nothing will encourage them back into the office quite like good old-fashioned FOMO (fear of missing out). The best part? Returning is their idea, not your instruction, so your employees keep their autonomy.

Telling a remote workforce to return to full-time office work post-haste is like dumping a bucket of ice-cold water on their heads. Give people a period to adjust, to recalibrate to new terms and conditions. Trial out hybrid arrangements such as three days in the office, two at home. Use this transition period to really underscore how great in-office working can be.

It might ruffle the feathers of some staunch ‘home-birds’, but if a return to office working breeds greater collaboration, connection and general wellbeing, it could be a welcome change. Perhaps, if employers take their cue from companies like Twitter, workers will begin to rediscover the benefits of being physically present with the flock – that’s Twitter-speak for camaraderie - and fall in love with face-to-face collaboration again. 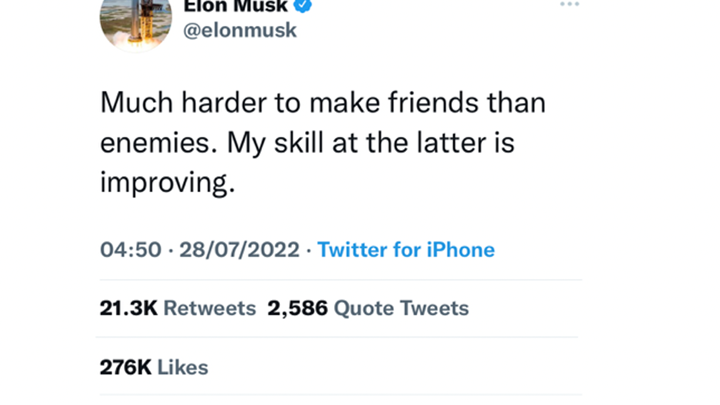 Is Elon Musk About to Set Fire to Twitter's Employer Brand?

What effect would the leadership of Elon Musk have on the employer brand of Twitter and its capacity to retain its best talent?..

Twitter's new owner has been handing out the redundancy notices, while elsewhere in the tech sector other notable brands have been doing similar. A real test for their employer brands...