The Good, the Bad and the Possibly...

A look over the shoulder as we bid goodbye/riddance to 2022 and a quick glance up to see what 2023 may bring to the world of employer branding...

Over the last 12 months, the world of employer branding and talent attraction has witnessed both the best and worst exposition of leadership, empathy, commitment to purpose and authentic story-driven content.

For every well-researched campaign full of wit, originality, clarity and creativity, there’s a lazy, ham-fisted attempt which insists that working in a freezing warehouse at minimum wage with minimum breaks is the greatest privilege that could be afforded to any working life.

And the leaders. Patagonia founder Yvon Chouinard, announced that the firm was handing over all its annual profits (usually in the region of $100m) to help fight the climate emergency, saying: “We’re making Earth our only shareholder. I am dead serious about saving this planet.”

In doing so, Patagonia galvanised its customer base and put a flag in the ground with regards to authenticity and citizenship. If you’re truly concerned about the impact of your purchasing decisions on the planet, Patagonia made itself the only logical choice.

Any company now claiming to be purpose-driven and cause oriented must set itself against such a benchmark. Patagonia has removed any excuse for paying lip-service to corporate social responsibility.

By contrast, the tech sector saw perhaps the worst examples of clumsy leadership, alienating workers with poor decision-making and a series of badly handled layoffs.

Elon Musk’s dumpster fire at Twitter continues to blaze away and has been chaos from the get-go. Laying off half the workforce in a typically off-hand manner, making up strategy on the run, including a botched attempt to add more authenticity to its verification system, kicking verified journalists off the platform and conducting various polls on the future direction of the site.

All of it suggests that an entire company with significant global impact and a (still) large and dedicated workforce is being run as a $44bn prank for a dedicated community of die-hard fanboys who expel milkshake through their noses at every hilarious utterance from the company’s CEO.

His latest promise to step down from the position as soon as he finds “someone foolish enough to take the job!” will no doubt be met by equal amounts of milkshake and salty tears at the realisation he may step away from the role and end the cabaret.

And it surely is the outstanding contender for the year’s worst bit of employer branding.

Meanwhile, Facebook/Meta faced much criticism for making 11,000 job cuts. For which CEO Mark Zuckerberg has at least apologised.

"I want to take accountability for these decisions and for how we got here," Zuckerberg wrote in a memo to employees and offered four months of severance pay to those being made redundant.

By doing so he just about managed to not undermine what has been some excellent employer brand work by the company.

The Meta careers site is well thought out and provides testimonials that support the company’s mission, vision, and benefits. The purpose of the company is clearly described, with reference to impactful work, innovation, and a focus on people and culture. 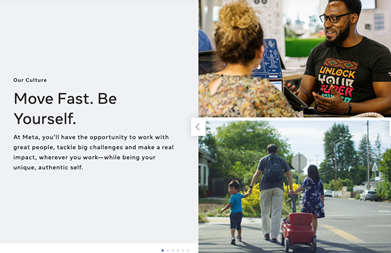 Elsewhere, Microsoft can clearly highlight training and learning opportunities available within the company through its site, using empowering language, such as “do what you love” and “empower millions”.

Its employer brand encapsulates diversity and inclusion, CSR and sets out a clearly defined picture or working life at the tech giant using original imagery and stories.

Disney, meanwhile, even has its own Life at Disney podcast as part of its employer branding efforts.

The website provides a clear insight into the company purpose, vision, values, and benefits, such as a health insurance and training, with a nod to impactful work and a deep focus on customers and guests.

It highlights training and learning opportunities available within the company, including the Disney College Program and again uses powerful imagery showing diverse employees collaborating and having fun with colleagues and guests.

Next in employer branding

Brands are upping their content game in so many ways and in 2023 more will use employer brand as an effective means to attract great talent but also change the sentiment of their brand overall.

Talking about the people behind the brand produces heartfelt, authentic content that humanises a company and helps to reach new consumers.

It’s a way of creating more affinity without overtly bragging about products and services.

Not only are millennials and generation Z making career decisions through employer brand, but they are also making consumer decisions based on how ethical a company is. In 2023, you will see more employer brand content in main marketing channels.

Look out also for the emergence of TikTok as a force in employer branding next year. Messaging needs to go where the audience is and those aged 20-39 make up more than 44 per cent of the TikTok user base. See also YouTube Shorts which indexes directly into Google giving you twice the return on your investment.

A recent Pizza Express campaign featured employees showcasing how they are empowered to express themselves at work, using TikTok to pose questions about perks. The campaign attracted more than 1.3 million impressions in just two months, with a conversion rate of 1.69%.

Employee alumni programmes are also going to be increasingly important in 2023. Expect to see plenty more employers joining the likes of Microsoft, Google, Coca-Cola, Pearson and others in building communities of former employees continuing to enjoy networking, learning and other opportunities and adding to the goodwill and positivity around the employer brand.

Oh and, predicted for at least the last three years maybe, but 2023 is definitely the year SEO becomes a seriously invested marketing initiative and part of a staple diet for employer brand.

This year. For definite.