Give and Get Marketing in the Real World

Even casual observers of our work will know that our whole ethos as ‘Defenders of Happiness’ is about helping people to find a job or career that rewards them financially but, more importantly, in the sense of purpose and belonging it brings them.

Do something you love, it has been said, and you will never work a day in your life. Employees want to enjoy their work and employers want staff that are committed to their vision and in it for the long haul.

Our Give and Get approach to employer branding is therefore a win-win, designed to act as a smart filter for the recruitment process by repelling those not suited to an organisation and compelling those who will align with the values and realities of that workplace.

It can seem counter-intuitive to some, but it is proven to increase retention rates, keep the level of applications at a manageable level and attract the best talent towards your organisation.

This Give and Get philosophy is seen as refreshingly honest and is built on deep research based on interviews with management and staff to reveal the true day to day experience including both the rewards and the struggles.

In fact, highlighting imperfections or using plain old honesty has become a powerful marketing tool and there are numerous examples of brands who seek to repel customers to welcome the right ones in. 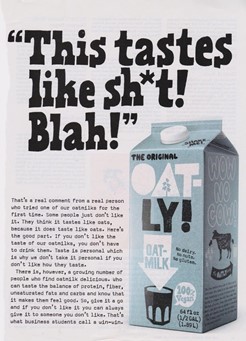 Non-dairy milk brand Oatly, for example has been blatantly honest about its brand recently, placing ads saying: “If you don’t like the taste of our oat milks, you don’t have to drink them. Taste is personal, which is why we don’t take it personal if you don’t like how they taste.

We immediately trust that brand more for being honest about what we already know about it - not everyone likes it. And in doing so it asks us the question “Would I like it?”. Only one way to find out, right? If you try it and hate it, well it’s not for you, if you try and like it, you now feel an affinity to the brand. You passed the ‘test’.

Probably the most famous example, and one which has passed into the lexicon (here in the UK at least) is Marmite. Such is the binary appeal of the pungent brown toast covering that it has become linguistic shorthand for things we either love or hate. Donald Trump, for example, while often compared to other unctuous brown substances, is very much ‘Marmite’ in the level of appeal he holds. 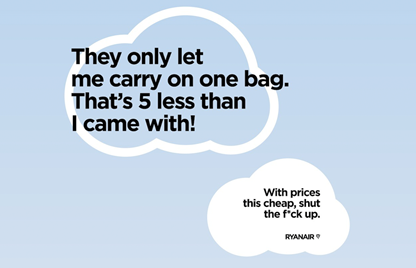 Irish “no-frills” airline Ryanair and its CEO Michael O’Leary seem to delight in conveying total disrespect for customers and employees alike. In a crowded field, he stands out as one of the most repellent company bosses around. O’Leary has even joked that he would do away with seating in the aircraft if safety rules permitted him to do so, to get more passengers on.

Ryanair passengers know that they will get a cheap seat on the plane and that’s it. No free meal or drinks unless you want to pay for it. And what you pay for it will likely cause you to shed a tear.

The airline even ran a marketing campaign based around some of the more popular complaints about its offering, with the blunt but effective pay-off - “With prices this cheap, shut the f*ck up”.

Just how long it can continue to bait its customer base in this way is an interesting question. But it definitely knows its audience. Ryanair customers book on price and price alone. Despite the complaints they still come back.

“Our booking engine is full of passengers who have sworn they will never fly with us again”, points out O’Leary.

The problem is his attitude to his customers also extends to his staff and pilots too. Tired aviators? No problem.

“Once you are trained … I would challenge any pilot to explain how this is a difficult job or how it is they are overworked or how anybody who by law can’t fly more than 18 hours a week could possibly be suffering from fatigue.”

Oof. Expensive tubs of Pringles are one thing but a pilot falling asleep while he’s flying you to Dublin is a different matter.

“Drowning in the Irish Sea? Shut the fu*k up”, isn’t going to play well with even the most spendthrift traveller.

Chocolate brands are also known to push away certain customers. There’s no way it would get approved now, but perhaps the most obvious example is the Yorkie ad campaign which launched in 2002, declaring the truckers’ favourite as “Not for girls”. That’s half the population dismissed, right there.

Anyone who has driven up a UK motorway and noticed the odd proliferation of ‘adult’ shops on the route, will have worked out that lorry drivers long ago migrated from chocolate to a somewhat more salacious use of their break times.

Mars’ Celebrations brand recently declared itself free of the coconut-centred Bounty bar in its family-sized tubs, immediately disbarring lovers of the fun-size tropical treat. Hardly likely to lead to questions in Parliament but enough to grab some notable headlines for the Christmas staple.

And it will almost certainly make a comeback, generating even more PR. Smart stuff.

When aligned with a purpose the Give and Get is at its most powerful. Patagonia has been deliberately telling people not to buy its jackets for years as part of its commitment to saving the planet.

The message was intended to encourage people to consider the effect of consumerism on the environment and instead sign up to its Common Threads initiative, which encourages people to buy only what they need, repairing what breaks, and re-using or recycling where they can.

And now, of course, if you do buy a Patagonia jacket, all the profits from that go to environmental causes as well. You ‘Get’ either way.

The internet has changed everything in marketing and customer review sites have placed utmost emphasis on authenticity and reality over spin and make believe.

Customers know it and your talent audience knows it too.