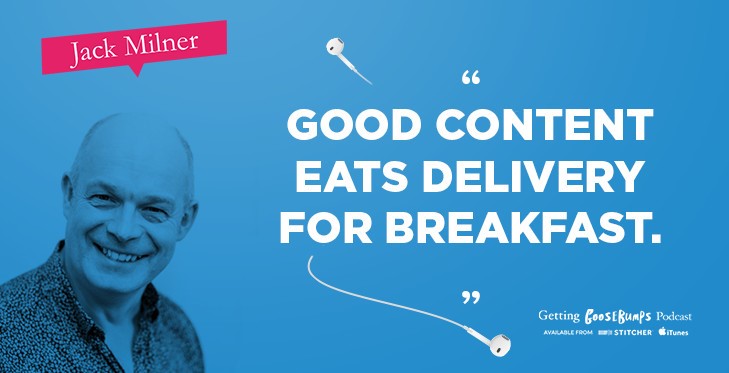 So on this weeks episode I am joined by Jack Kester Milner. Jack’s career history includes an impressive simultaneous career as a director writer, comedy actor and producer in television, radio and film. Now based on all that he learned in the comedy sector, he provides organisations and individuals with the tools to influence, persuade and engage. He does this in his series of comedy workshops ‘Stand up and deliver’, which have been presented to a whole host of clients such as the National Theatre, Channel 4 and ITV.

So Jack and I discuss the skills he gained from his career in comedy including stand-up and improvisation, and how these can help businesses communicate with their audience in a much more effective way. He explains how building a rapport with your audience in stand-up through certain techniques can be transferred to building one with your customers.

Jack illustrates humour to be a best practice when communicating your message effectively, because often an audience may not expect you to be funny. Injecting humour to your approach can create a memorable story. We talk Seth Godin and his obscurities during Ted Talks that have made his in particular the number one funniest Ted Talk.

Knowing your audience and how to play them

We delve deeper into techniques used when verbally communicating a message. What is of most importance content or delivery? We look at the key components that make up a whole performance. Presence is everything, starting well and keeping the audience engaged from start to finish.

#44 The Craft that is Comedy with James Acaster

On this weeks episode of Getting Goosebumps, I am joined by Stand-Up Comedian James Acaster. James has been a comedian for the last 8 years and has appeared on Mock the Week, Live at The Apollo & Russel Howard’s Good News! He gives insights into the world of comedy that is far removed from the world of business.