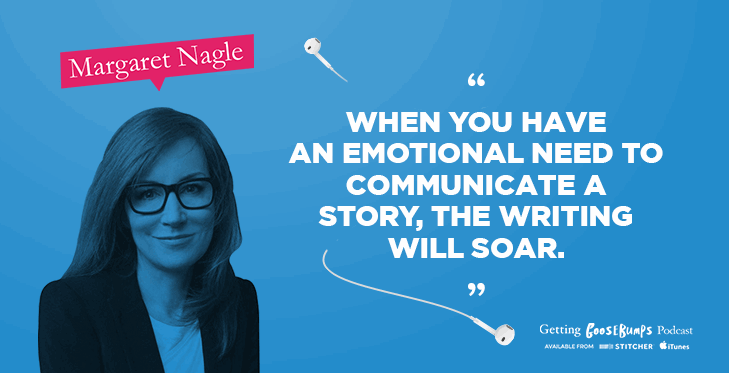 Margaret Nagle started out as an actress. However, she was told she didn’t belong in acting; Margaret was a writer. Sure enough, Margaret Nagle went on to become the successful screenwriter behind Warm Springs, breaking a record with 16 Emmy Award nominations.

Since the success of Warm Springs, Margaret has written ‘The Good Lie’ featuring Reese Witherspoon and has even written for Boardwalk Empire.

The skill of storytelling

Margaret has a natural skill for crafting a good story. Margaret talks about one of her latest projects for HBO, where she’s taken on the tough job of writing the misunderstood character of Joseph Patrick Kennedy.

Margaret talks about how to approach writing effectively. She explains why it’s easier to write when you identify some emotional logic and objective for yourself within the work.

Margaret shares why it’s key to embrace the flaws of characters, to create a better story. We discuss how great writing often makes us root for the most flawed characters rather than the good!

It’s the magic of writing is the ability to create complex characters that resonate in different ways with the audience.

Margaret talks about the impact of simply changing the way we think, in the smallest ways. We don’t always need to reinvent something and build something entirely new; we just have to shift our perspective.

People often get scared by the thought of change, but you don’t always need to make a big change in your work to see results!

Check out the next episode of Getting Goosebumps, "The Gift Of Storytelling" with one of the most sought-after screenwriting lecturers in the world, Robert McKee.