#21 From Riches to Rags with Charity: Water Founder Scott Harrison 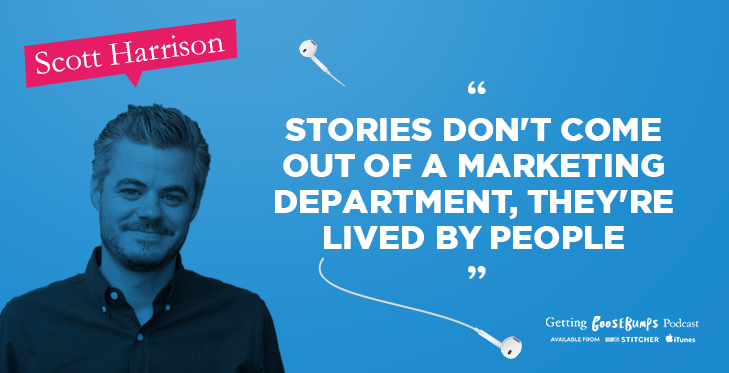 On this episode of Getting Goosebumps: The Power of Storytelling, I had the opportunity to chat to Scott Harrison, the Founder and CEO of non-profit organization Charity: Water, which has benefited over 4.6 million people so far. Speaker at Inbound 2013 and officially the last man to make me cry, there’s no denying that Scott is more than capable of creating and telling a great story!

We delve straight into the amazing story behind the formation of Scott’s charity, all starting with becoming a top nightclub promoter in New York City to turning his life around as a volunteer in the most extreme scenes of poverty.

Scott spent his time with people born into entirely different circumstances, learning more about their individual circumstances, families and aspirations. Ultimately, he invested time and energy in seeing the journeys of other people first-hand and building his own authentic story from that experience.

Scott shares one of the most interesting methods of storytelling he’s used for his charity, which all stems back to the idea that people enjoy stories in unlikely places.

It’s worth thinking outside the box for storytelling and really capturing and maintaining the attention of your audience. Scott’s mastered this through a unique social media plan that involves sending out tweets and a drilling rig in Ethiopia. It’s not your average storytelling method…and that’s what makes it work!

I was interested to find out Scott’s approach to encouraging people to engage with his charity. The truth is, many people don’t like to associate themselves or their brand with heavier, upsetting causes in the long-term.

So, how does Scott tackle this? We discuss celebrating the values and community of Charity: Water to really build a positive brand image that people want to get involved with.